I hit a rocky patch in the road a couple of years ago when I found myself having to contend with the consequences of being made redundant from a well-paying job that I’d held for over 15 years. This coincided with the fact that my daughter was going into adolescence, and I was going through menopause at the same time. I felt like I was in the middle of a perfect storm with both my own and my daughter’s hormones going crazy, and unemployment stretching out in front of me.

After going through all of the emotions triggered by my redundancy, I decided to make use of the time I had on my hands by writing a book about my experience of menopause. My thinking was that I could put the struggle I’d been having to good use by writing about the improvements I’d achieved by focusing on the fundamentals of diet, exercise, stress management, and mindset.

The thing I didn’t realise at the time was that I was going to have to build a business around my book to keep my family’s finances afloat. The long and the short of it is that after applying for over 30 jobs that I didn’t get, I decided to bite the bullet and save my energy for more fruitful endeavours. One of the unexpected consequences of this was that I experienced two incredibly powerful stages of healing as a result of writing down my story for the book that became “Thrive in Midlife”. 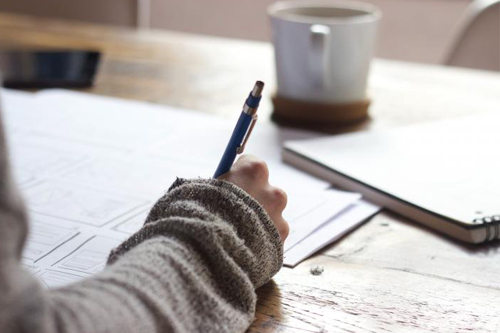 One of these came about when I was considering the options I had for handling menopause in 2014, compared with the options my mother had when she was facing the same scenario in the early 1980s. The stark reality here was that in mum’s day, synthetic hormones were prescribed without a second thought, and sadly she was one of the many women who paid the price in terms of contracting breast cancer in her late 60s.

I share this part of my story with you because I felt my heart split open when I wrote about mum’s brief relationship with Lucy for my book. This changed the course of my life completely and resulted in my developing a book-writing wing in my coaching practice.

I’ll give you the backstory here so that you can see why this heart-opening experience meant a great deal to me. The thing is that there were a couple of traumas around the time of my birth that fundamentally shaped the way I lived right up to 2007 when I stumbled on Neuro-Linguistic Programming (NLP).

I was aware of one of these traumas, but the other one came as a complete shock to me. I knew that I had been separated from mum shortly after I was born because she almost died from a blood clot that had travelled to her lung. However, the bigger piece of the puzzle related to the fact that I was the surviving twin in a case of Vanishing Twin Syndrome, something that didn’t come to light until I was 45.

As the name suggests, Vanishing Twin Syndrome comes about when a twin disappears in the uterus during pregnancy. Most mothers don’t even know this has happened because the foetal tissue is either absorbed by the other twin, or absorbed into the placenta. So if this happens before an ultrasound is done, there’s no material evidence that the twin ever existed.

What this meant was that I could have gone through the rest of my life without finding out what caused the gnawing feeling of emptiness that I’d felt for my whole life up to that point. One of the consequences of this is that before I was even born, I’d learnt how to shut my feelings off to avoid the pain of abandonment that I felt in the first instance when my twin left me, and then again when my mother was absent in the early weeks of my life as a result of teetering on the brink of death herself.

Sadly, mum and I never really got around to bonding while she was alive, but I’m truly grateful that I finally made up for that in the process of writing my book some 10 years after she passed away. Among other things, what this experience of reconnecting with my mother did was helping me loosen the grip of the toxic relationship with food that I’d developed as a numbing strategy very early on in my life.

This was a fantastic result in and of itself, but even better still was the fact that the universe stepped up to the mark just as I was finishing my book, by opening up a spot for me in clinical trials that were being run by Sydney University to gauge the efficacy of EMDR in the treatment of binge eating disorder. Some would say that the fact that this happened shortly after the cathartic experience I had in posthumously bonding with my mother was a coincidence, but I think not.

Some people might also think that my decision to write a book at the end of 2014, when my life was in a state of utter chaos, was a bit odd, but again I think not.

I feel blessed that writing my own story down leads me to find work that doesn’t feel like work at all.

This is because I get to experience joy every time I help one of my clients move through the wonderful journey of stepping into their power and putting their personal story or other aspects of who they are into a book that they author.

You can find out more about Jane at www.writewithjane.com.