Oddly enough, I have women come to me and ask for dating advice. That’s not odd. But what is, they go into great detail about all their flaws and insecurities, and then say who is going to love me? Inevitably, I say the right one.

We get off course when we think that we have to be something else, in order to get the type of person we want. That’s a trap, and that’s not healthy. Not only that, but it’s not honest. Pretending to be something you’re not is living a lie. And should you land the type of person that you want, the chances of you keeping them is not good, because you presented as something you’re not. And just how long do you think you can live a lie before it causes internal conflict? A few months? A few years? Whatever the number is, eventually it will wear thin on you, and your insides will be screaming for change.

Your beauty and strength come from your uniqueness. Not from falling into a box. When you feel as though you have to compete in the dating world, you’re not honoring yourself. In order to attract the right person, we need to be authentic. Anything short of that, and we’ll end up settling. I see this frequently in my younger clients. While it does happen with people of all ages, younger folks (in my experiences) sacrifice a lot to date the person they want. Older people are willing to compromise, but not their values. In other words, because they know who they are and their worth, they don’t settle.

We think we have to overcompensate.

So many of us have gotten into the pattern of being critical of ourselves. We pick apart every little thing that we’re not happy with. As we do this, we do not project confidence. So we think we have to overcompensate. And as we do this, we move away from authenticity. Thus, putting us in a place of not showing who we truly are.

I think it helps to know we all have flaws and scars. Okay, you can’t get behind the idea that there is beauty in imperfection. What I have noticed in couples who have come to me for infidelity issues, it is rarely about looks. It is about different. And we can’t compete with different. I can only count a handful of times when a man said to me that he stepped out, because she was better looking than his wife/girlfriend. Many men have beautiful wives and girlfriends at home, and still commit infidelity. Likewise, women do the same. They have a good partner at home, and they step out. Why? It’s different.

Most of us have heard the term dated down. It usually refers to dating someone who is not as good looking as them. (I know. That’s messed up). If we’re honest with ourselves, some of us may have thought this at some point. I bring it up because it’s different. In the end, most people date people who are a good fit for them. Not who looks best on their arm. That is why it is so important never to comprise our values, it rarely works out.

Many years ago a married couple were having problems. The wife took interest in another man. Complete opposite than her husband. The new man was straight out of a romance novel. Beautiful body, long hair and a bit of a rebel. The husband found out and started to dress like the new guy (and even grew his hair out). It was very painful to watch, as the women had no interest in her husband. Well the affair ended, as well as her marriage. What’s ironic is that she ended up marrying another man who was very similar to her first husband. How come she wasn’t attracted to her husband after he changed his appearance? Because that is not who he was, and that did not make him different. 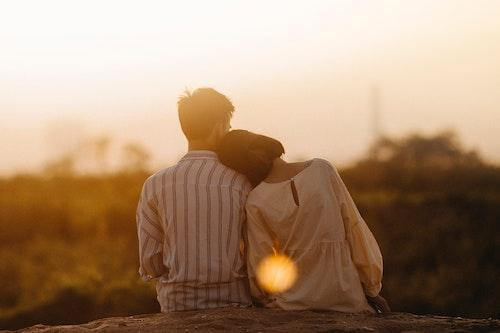 For me there is no such thing as dating down. If we honor ourselves, regardless of what others may think, we will attract the right person. We can change our looks and try and be something that we really aren’t. We may even be successful for a period of time and “get the goods.” But in the long run, the person who will be attracted to the real you, will honor you. Because there is no dating down. There are just those who will get us. And those who don’t.