Every parent wants to be the best they can be. Every parent has a role in their child’s life to be a leader, coach and best friend. How do you maintain the balance with your child? It is important to impart your knowledge and wisdom, the right values, principles and ethics.

Let me tell you a story about my youngest brother. He lost his father when he was only six. Yet, due to our mother and my sisters, he grew up in a loving family. Even so, his was not an easy journey.

I and my sisters journeyed overseas to start new lives or embark on further education. My brother had only our mother to guide him.

Unfortunately, my brother chose a difficult path, even with my mother’s support. He dropped his classes at school and spent his time playing his guitar and chatting online. He became out of control and disconnected from the family and we were very concerned for his wellbeing. We talked to him, gave him lovely gifts and asked him to at least get some tutoring to further his education. He did, and that is how he achieved his O and A-levels that made him eligible for the University of London.

When it came to applying for university my brother was passionate about physics. We encouraged him to study electronics and electrical engineering as our family has a history in engineering. So did he make it straight away?

Again no. He seemed unable to focus at university. University was difficult to get to and my brother was frequently late and he started missing classes again.

He became totally absorbed in playing the guitar and downloading music from the internet. He bought an amplifier and more guitars, to create music and go for jamming sessions. Playing the guitar as a profession can be a difficult life unless you are a renowned musician, and we were worried about his future. 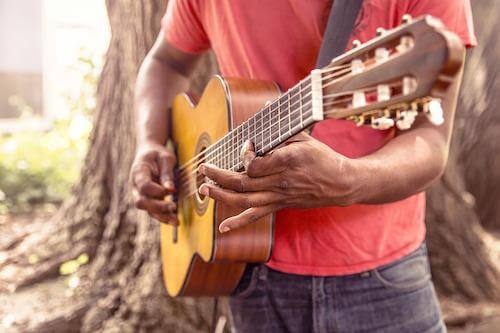 Around that time that our youngest sister was getting married abroad and invited us to join her ceremony—God was with us at that time.

When we went abroad, our brother spoke out about what he really wanted to do with his life. He said that his dream was to study abroad. My second sister knew of a school nearby where he could major in Electronics and Electrical Engineering, majoring in physics being his favourite and minoring in music: allowing him to still follow his passion of playing his guitar.

Having decided his path, my brother applied and took necessary tests to enrol. His credits were transferred from his previous university. We were so proud of our brother as he graduated from his program with flying colours. Of course, there were the normal challenging times that getting through a university course can present, but he made it through.

The next step was to get a job and this proved difficult as he was abroad and needed to be a citizen. He ended up completing a short computer science internship, specialising in PHP programming instead.

As my brother was unable to get a job overseas, he returned home and started applied for jobs. Within a month he got hired at a web programming company, focussing on PHP programming. Knowing about PHP, the way I do, it is a wonderful process where you keep on learning every day.

My brother now loves his work and is now entirely concentrating on web and PHP programming.

He feels centred and focussed as he expressed his skills and talents doing work that he loves.

Supporting your child to be the best they can be, does take determination and willpower. Parenting is a long term commitment, where you guide and support your child until they can take full responsibility for themselves. Never, ever give up on your child, ALWAYS see the best in them even when they cannot see it. Overtime when you hold them in this space, they will tap into their true empowered self. A healthy happy child goes from being fully dependant to one that is independent when they are ready to make their way in the world as a functioning adult. Never underestimate the importance of your role as an unconditionally loving parent. God bless!